Top 5 Benefits of the Alexander Technique for Kids 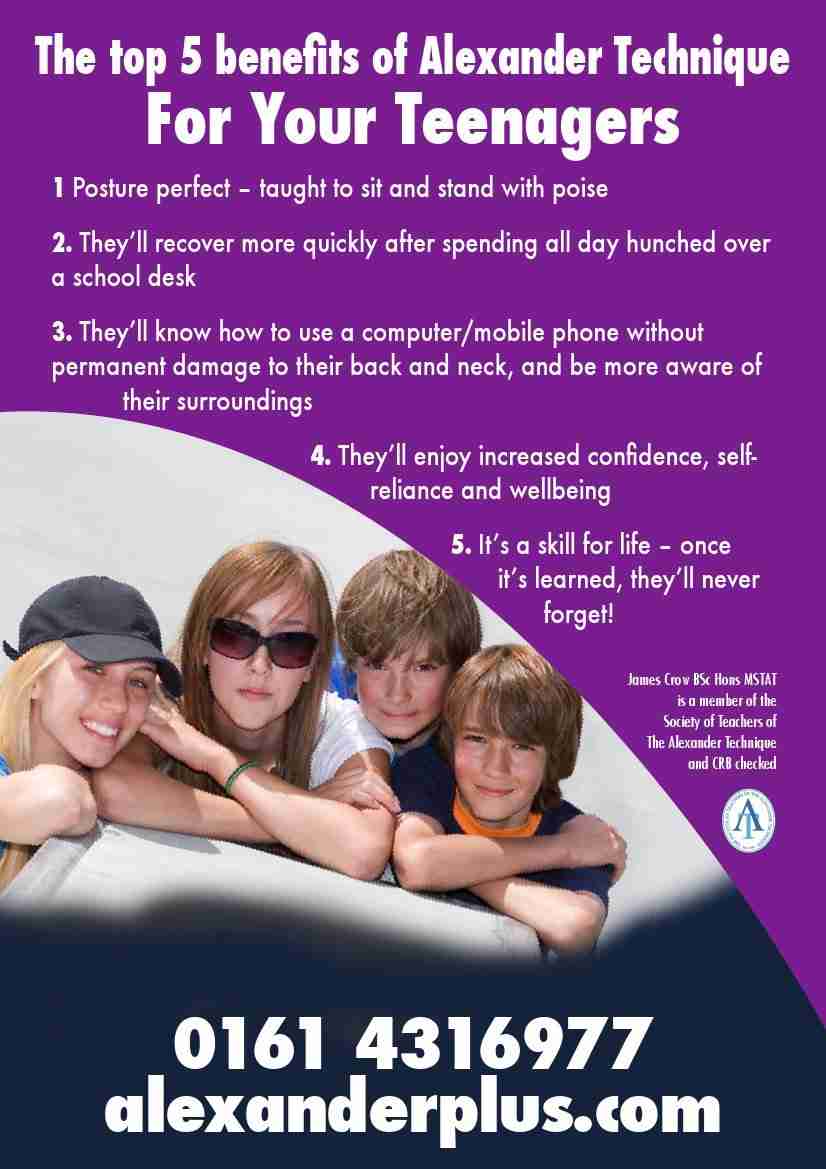 In a world where using digital devices is normal, our kids are likely to grow up with less and less awareness of their own bodies, whilst they’re engaged in their digital worlds. How often do you find your child glued to their phone, tablet, games machine or computer, oblivious to the damage they’re doing to their backs, necks, and their ability to concentrate?

As adults, we’re ‘digital immigrants’, having grown up in an age when all of these technological toys were unavailable or only just beginning to become a part of our lives. However for our kids, it’s just perfectly normal to be interfacing with the outside world as often as possible. Unfortunately, being immersed in these digital worlds means that they’re unaware of the damage they’re doing to their own bodies, and particularly to their posture.

We’re just going to have to accept that the future holds more and more immersive, virtual digital time for our children. All we can do is try to help them to look after themselves, as best we can, as they live in these virtual worlds. There’s no point trying to deny them access to these tools, as they’re going to need them to get on in the world when they get older. Kids want instant access to information, to their friends, to games, and to the internet in general. They connect with their friends through their phones, their tablets, their consoles and their computers. An it’s normal for them now.

We just have to accept that this is the future, so…

How can you help?

You can help by teaching them to be more aware of their bodies whilst they’re immersed in these virtual worlds, so that they’re sitting brilliantly and not likely to get back pain, neck pain, and all the repetitive strain injuries that we as adults already suffer from. Teaching them Modern Deportment using the Alexander Technique is probably the only way you’ll be able to get them to look after their posture whilst they’re living in these virtual worlds.

If you bring them to try a session, you’ll soon see how effective it is at helping them have great posture, and effortless poise, as they interact with this new world. Sit in on their session, and enjoy watching them learn, as you commit to helping them have the very best in the future.

I bet your kids spend at least a couple of hours a day playing on their phone, tablet, handheld game or computer?

And I just bet they’ve got bad posture, and maybe they get headaches, back problems, and have trouble concentrating?

And finally, if you’ll allow me one last guess, you NAG and MOAN at them but…

IT DOESN’T MAKE ANY DIFFERENCE!

We all worry about their bad habits causing all sorts of posture and health problems in later life, but it seems there’s nothing we can do about it. Until now!

They love playing games – but just look at the bad news…

85% of children (who are allowed to play games on such devices) spend up to four hours a day doing so
78% of parents are concerned about their child’s posture while playing such games
Parents are concerned that gaming and computer use affects their child’s wellbeing with:
lack of concentration – 32.4%
back ache – 30.9%
neck ache – 26.2%
headaches – 31%
It’s never too late to get their bad posture sorted. Modern Deportment isn’t about which knife and fork to use, or how to curtsey. That’s all just history. Great posture isn’t just about sitting up straight anymore, it’s about how to interact with the modern world, HERE AND NOW!

All you need is someone who’s skilled at helping them have amazing posture – and then helping them to keep it!

If your kid’s posture is so bad now, what are they going to be like next year, and the year after that?

Whilst we struggle to program the tv, or even our phones, our kids are plugged in, and amazing at picking up new technology. Out there are artificial worlds we could only dream of as kids, and they’re going to enjoy it, whether we like it or not!

They’re going to live to 100, or so we’re told. But do we want them to live that long with all the pain bad posture causes?

Advances in medical science mean that even when they do get ill, new organs will be created, and tiny machines are destined to clean their systems and maintain their organs. OK – I’m guessing, but even if they can, what if your children grow up stiff and bent over like our parents were, and their’s before us? It won’t matter what they swap out, their bad habits will still be there. And a very long life of discomfort, aches and pains, stiffness and limited activity.

The chances are they’re already slouched on the sofa, hunched over the games console or computer playing games. Maybe you see them crunching up with a mobile phone glued to one ear, oblivious to themselves and the world around them. This Christmas they’ll receive even more technology, and you’ll watch them – sedentary, hunched up, and disconnected from the world around them. This mind-body split means that although they’ll be able to interact brilliantly in the online world, their bodies will be suffering right here and now.

Time after time I hear parents moan that their kids have bad posture, and it’s this bad posture that results from losing awareness of themselves, their actual real here-and-now physical bodies! Telling them to sit up straight just doesn’t work. Did it work for you?

The good news is that teaching them the Alexander Technique helps them have poise and posture, and be aware of their fab new posture even whilst they zap the next wave of space-born uber-mutants. Or whatever…

Get in touch now to find out how I can help.